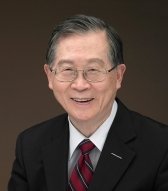 Dr. Chan-Mo Park was the 4th President of Pohang University of Science & Technology (POSTECH). After retiring from POSTECH in 2007 Prof. Park served as a Special Advisor on S & T to the President of Republic of Korea (ROK) before he assumed a Chancellor position with Pyongyang University of Science & Technology (PUST), a unique private and international university in DPRK since October, 2010. Prof. Park received his B.S. degree from Seoul National University and M.S. and Ph.D. degrees from University of Maryland, College Park. He earned an Honorary Doctor of Letters degree from the University of Maryland University College in 2001 in recognition of his scholarly achievements and distinguished service.

Dr. Park’s experience includes professorships in Computer Science both in U.S.A. and Korea. His research interests are Computer Graphics, Virtual Reality, System Simulation and Science Diplomacy. For the past several years, he has been involved with research activities concerning IT development in DPRK including a joint research with Pyongyang Informatics Centre (PIC) for 7 years. Dr. Park was decorated by ROK with the National Order of Camellia in 1986 for his contributions to the advancement of S & T in Korea and received the Teacher of the Year Award from The Catholic University of America in 1987. In June, 2005 he was decorated by ROK with the Blue Stripes Order of Service Merit for his contributions on IT development in Korea and collaborations with DPRK. Prof. Park also received the International Alumnus Award from the University of Maryland, College Park in April, 2009 for providing significant leadership to another country’s educational, cultural, social and economic development. In November, 2018 Chancellor Park received the Dosan Education Award from Dosan Academy in Seoul, Korea for his contribution to the Advancement of Science and Technology in Korea, Manpower development and Inter-Korean Collaboration on Information Technology.